We hope to send Nordic musicians, singers, performers, artists, photographers, journalists to special rainbow events in the Nordic region and to the critical rainbow barricades in Eastern European and beyond …. and hope to accept invitations to events in Riga, Tallinn, Vilnius, Torshavn, Mariahamn, Moscow, Minsk, Krakow, Poznan , Istanbul/Ankara, Toronto (Iranians in Exile), Paris/Marseille (Algerians in Exile) and Mauritius.

Please let us know if you're interested in any of the above and in what way.

P.S. Realizing that we never receive enough funding to send all the desired "Moonbow warriors" to rainbow events, let us know if you are making any travel plans of your own and might want to join in Stockholm fund-raising events and Moonbow delegations to other cities even when outside financial support becomes available.

Posted by webmaster at 1:14 PM

Minsk/Stockholm - Plans are underway to organize rainbow events underground in Belarus and in "exile" during the next year - following the cancellation of the November 11th Minsk stage of the 2006 ILGCN (International Lesbian & Gay Cultural Network) world rainbow cultural conference because of the arrest of 7 lesbian and gay Belarus activists.

"We had appealed to the international community to join us in Minsk to help break our isolation and make a difference - and we believe that this human contact is more important than ever before," says Slava Bortnik of LGBT Amnesty Belarus, one of those arrested. 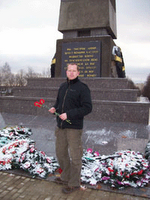 The ILGCN had earlier arranged other "Belarus in Exile" events in Stockholm and London when Belarus authorities denied visas to foreigners and after earlier events in the Belarus capital were marred by police violence and where venues were shut down and participants thrown into the streets.

The Poznan stage of the 2006 ILGCN conference - taking place on November 18 -- supported efforts on behalf of Belarus in the coming year, and the new ILGCN Eastern Europe Secretariat in Warsaw is to give special attention to Belarus.

"We are asking our ILGCN colleagues to help arrange "exile" events in neighboring Poland, Latvia and Lithuania -- and plan some kind of international underground rainbow events in Belarus," says Bill Schiller, secretary general of the ILGCN Information Secretariat in Stockholm. "It was crucial to meet face to face with these gay activists who had been detained and interrogated - noting that instead of becoming discouraged and giving up, they take this harassment and threats from the special police as part of daily life in this last dictatorship of Eastern Europe - determined to remain on the rainbow barricades."

"I'm proud also that the Swedish Institute supported my visit to Minsk - underlining that the official Swedish body responsible for international exchange gives both Belarus and rainbow rights there high priority," Schiller concludes.