The cultural event of Tupilak (Nordic rainbow culture workers) and the ILGCN (international rainbow culture network) Information Secretariat-Stockholm on March 7, 2020 in the Swedish capital was a salute to the coming annual United Nations Anti-Discrimination Day -- the anniversary of the Sharpeville Massacre in South Africa -- on March 21st -- and the 75th anniversary year of the liberation of the Nazi death camp Auschwitz in Poland.


The event included strong music of Elise Street of Sweden and a video greeting from Polish gay art historian, Tomasz Kitlinski, facing a 2 year-prison term for publically defending LGBT people, Jews, women and others from attacks from Polish neo Nazis. His message came from Lublin -- one of a 100 Polish cities putting up signs declaring the place to be "LGBT Free" similar to the "Juden Frei" signs of the Nazi occupation of Poland.

Part of the event's art exhibit included "The Polish Table" with posters, books and catalogues of LGBT art of Poland and Eastern Europe created by Kitlinski and his partner, Polish art historian Pavel Leszkowicz -- works both from modern times and centuries past.

Another presentation was made by Anna Giertz of Sweden about the new "Rosa Brus" project collecting sounds, poetry, music of the Swedish LGBT community in the past and present -- a project working in collaboration with Tupilak. Future Rosa Brus events will take place in Gothenberg and the northern Swedish city of Umeå.

A number of events in many cities have marked the 75th anniversary of Auschwitz, but few have mentioned that LGBT people also perished in that Polish and other Nazi camps," says Bill Schiller of Tupilak/ILGCN. "We were proud to have been the first official LGBT delegation to Auschwitz several years ago -- handing over a diploma to the head of Auschwitz Museum for mentioning LGBT in the information listing the category of prisoners.

"Our members also played the first music in the camp since WWII -- when prisoners were commanded to play music to calm the frightened inmates coming off the train cattle-cars delivering victims to the camp," Schiller added. "Our visit outraged the right-wing Polish parliamentarians demanding in vain the dismissal of the museum chief, some right-wing Polish media and even the pope!"

Tupilak chair, Sarah Florén of Sweden, described coming events such as participating in the international Bear event in the Estonian capital of Tallinn in April, in the WestPride event in Gothenburg in June, the International Day of Rainbow Culture, August 9, the LGBT Heartfest Film Festival in Rakvere, Tallinn and Tartu in early October, the 5th Nordic Rainbow History & Culture Month - October, including the 2nd Nordic Pride event.

"We were pleased to be informed that the ILGCN cultural ambasador of Hungary, musician Thomas Lovas, is to be honored with an award diploma in Budapest on March 21 by the Anti-Fascist Movement of Hungary," Schiller added. 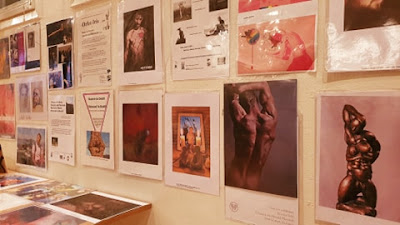 Art work of high quality was displayed by French New Yorker living in Stockholm, Alex Colard, and examples from the Tupilak & ILGCN international rainbow art and photography exhibition -- with works from over 70 countries.

"We were also pleased to be informed that the ILGCN cultural ambasador of Hungary, musician Thomas Lovas, is to be honored with an award diploma in Budapest on March 21 by the Anti-Fascist Movement of Hungary," Schiller added.

Another written contribution came from most recent addition to the Tupilak/ILGCN exhibition, Iranian, Paris-resident Shojaian Alirezan, sending a message to the meeting describing how he has replaced the classical 15th-century two women in a bath tub -- one pinching the other's nipple -- with two males -- one the openly gay Lebanese singer, Hamed Sinno of the Lebanese band, Mashrou Leila, pinching the nipple of man with a jackel´s head -- the Egyptian god of the underworld, Anubis!

"This is a tribute to the gays who raised rainbow flags in Cairo during a Mashrou Leila concert only to be quickly arrested by the police," writes Shojainan. "This is the situation in much of the Middle East." Some of these flag wavers have received asylum in Canada.