2011: April-May - Ankara/Istanbul, August-September - Crimea
ILGCN WORLD RAINBOW CULTURAL CONFERENCES
Istanbul/Simeiz -- Local organizers, the ILGCN Information Secretariat in Stockholm and ILGCN co-ordinators and ambassadors in a number of countries are planning activities for the two ILGCN world rainbow conference/festival stages for the coming year.
"The discussions, performances, exhibits and much more will be part of the 6th International Meeting against Homophobia to be held in several Turkish cities in the spring of 2011," says organizer Nevin Öztop of Kaos -Turkey. 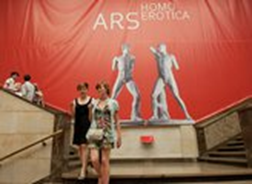 "We hope joining us at the ILGCN stage April 26-30 in Istanbul and May 5-6 in Ankara  will be such ILGCN personalities as Pavel Leszkowicz -- who created the sensational and historic ‘Ars Homo Erotica’ exhibition at Warsaw Pride at the Polish National Art Museum,” says Bill Schiller of the ILGCN Information Secretariat-Stockholm.
“And also Michael Gfroerer, prize-winning Canadian composer and musician as well as secretary general of the ILGCN North American Secretariat – Toronto, and Sweden’s well-known lesbian photographer, Elisabethe Ohlson Wallin to talk about her latest exhibit “Jerusalem” challenging the homophobia of the three world religious, and show some smashing art films from Canadian artist Leif Harmsen and his "Nudes in digitals."
"I hope to present a seminar on the creation of a non-commercial LGBT publishing house as we have done in London," says Ian Stewart of the ILGCN Literature Secretariat. "And we will be very proud finally to hand over in person the ILGCN-Paradise Press award diploma for outstanding contributions to rainbow publishing and writing to the Turkish publication Kaos since we've been waiting several years to do this!"

Humanists on the Rainbow Barricades

"I hope to present my multi-media program on humanist on the rainbow n barricades illustrating the battle against intolerance in the world's religions," says Rolf Solheim of the Norwegian Humanist Association and the Nordic Rainbow Humanists, who has ́made has his presentations around the Nordic region and in Poznan, Bucharest and other Eastern European cities.

"We want very much to present the latest information about the rainbow scene in Poland and especially in Belarus," says Lukasz Palucki" of the ILGCN Eastern European Secretariat - Warsaw "and also to help put a special emphasis on the importance of rainbow history."

"I hope to join the delegates in Turkey and document the event," says Finnish photographer Jussi Jääskeläinen, who documented the Nordic delegation's visit to Bucharest Pride several years ago.

"We have art work and photography from over 30 countries in the Tupilak and the ILGCN’s Travelling Art & Photography Exhibit" – including the latest art work from French-Russian artist Vladimir Kara of Paris and “Vladiks of Minsk, “ adds Schiller.

"I will be very pleased to perform at the ILGCN event in Turkey," says Swedish singer, musician and song-writer Peter Fröberg, who has performed at a number of ILGCN events and other international rainbow solidarity events throughout the Nordic region and in Eastern Europen cities.

"We're very happy that we could re-schedule this event for Turkey after the cancellations of last year's plans because of the disruptions of the Icelandic volcanoe causing havoc in the international air traffic,” concludes Schiller.
2nd World Conference Stage in Crimea
Irina Sizova

"This is also the site of one of my films about LGBT life in this part of Europe," says Belarus film director, Irina Sizova, who will also be screening the first Belarus LGBT documentary "They Still Smile" at the event.  "We also have some excellent support from some Ukrainian women who know the region well and the town itself."
"We hope that colleagues from Belarus and Russia are able to join us," says Schiller. "And we're pleased that we have some member of the ILGCN Eastern European Secretariat in Warsaw to help us veterans of the local scene and regular visitors to this well-known gay resort town of Simeiz." 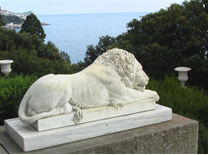 Photo of the "Simeiz lion"  by Irina Sizova
Posted by webmaster at 10:05 AM