Berlin -- British-born, German-resident teacher, journalist, LGBT activist and co-founder of the ILGCN, Colin de la Motte-Sherman, has died after a long illness and major surgery in a Berlin hospital at the ago of 79.

He worked for decades a pioneer with LGBT culture and human rights -- especially with the German branch of Amnesty International -- and delivered seminars on LGBT history, art, music and research into the Nazi and neo nazi persecution of LGBT people in a number of countries outside of Germany -- including Poland, Sweden, Estonia, Croatia and elsewhere.

Colin was one of the founders of the ILGCN at an ILGA (International Lesbian & Gay Association) world conference in Paris in 1992 -- a time when the international organization rejected the idea of LGBT culture as an important part of the struggle for rainbow rights and identity.  He was the editor/publisher of the ILGCN's publication, "Erato" for many years before it became a web publication based in Stockholm.

HIs last visit to Sweden with his seminars took place last year at the Stockholm stage of the 1st Nordic Rainbow History & Art Month - October, 2016.

A memorial ceremony will take place in Berlin on September, 16.  More information in the next "Erato." 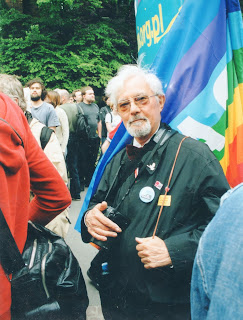