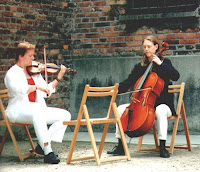 BUDAPEST -- The 2nd stage of the ILGCN world conference has been postponed since the dates for Budapest Pride have been moved back to August 30 - September 6.

Visby -- Tupilak /ILGCN work will be presented at the Baltic Square solidarity event on this Swedish island between June 29 - August 4 during a major political/cultural week.

Performances in the afternoon at Teater Tribunalen.

Gothenburg -- Work of Tupilak/ILGCN will be presented at the International Square solidarity event at the giant book fair
(the biggest annual cultural event of the Nordic region) September 24-27.

VILNIUS -- A European Parliament/ ILGCN rainbow cultural exhibition and seminars are planned for October in the Lithuanian capital -- this year the European Cultural Capital which so far has ignored rainbow contributions.
Posted by webmaster at 3:00 AM

Visby – A successful week of discussions, art and photos, Nordic CD music and performances took place June 29-July 3 at the" Almedalen Week" in this capital of this eastern Baltic Swedish island of Gotland -- during the biggest political, human rights and cultural week of the Swedish summer.

"We were pleased to be once again at the large silo in Visy harbor, " says Bill Schiller of the ILGCN (International Lesbian & Gay Cultural Network) Information Secretariat – Stockholm -- together with some 25 other internationally-minded human rights organizations.

Tupilak also participated in other LGBT discussions among the over 1,000 seminars and other events during the week, pointing out the urgent need to help Nordic colleagues on the other side of the Baltic Sea by criticizing the Lithuanian Parliament's ban on all positive information about homosexuality and the program of "Vilnius – European Cultural Capital 2009" deliberately ignoring rainbow culture.

During the week, Tupilak handed out the first of this year's "Bifrost Award" to the Östersjö Torget "for promoting rainbow rights and culture and proving that human rights groups working together can create a strong voice for international solidarity." The 2nd of this year's winner will be announced in September at the giant Gothenburg Book Fair. (Bifrost is the old Norse word for "rainbow" -- linking the world of the Viking gods and human beings – and honors today's hetereosexual-homosexual bridge- building.

At the "Baltic Square" presentation by Balkan women planning to repeat the "Almedalen" solidarity week in Belgrade this fall, Tupilak promised to send a delegation to the "Freja Forum" in the Serbian capital 13-15 November.

More information: info@tupilak.org
Posted by webmaster at 3:00 AM


BUCHAREST/STOCKHOLM -- The 2009 Nordic Rainbow Humanist award has been
presented to the memers of the newly-started Rumanian Humanist
Association.

The award diploma was handed out during the ILGCN (International
Lesbian & Gay Cultural Network) 1st stage of this year's world rainbow
cultural conference in the Romanian capital oon May 21st as part of
this year's annual Bucharest GayFest.

The Romanians are being honored for -- despite the association's
young age and the fierce homophobia from politicians, religious
leaders, the media and neo nazi hooligans in that Eastern European
nation -- giving strong support to the LGBT community and for
standing up in solidarity in public at Pride parades and LGBT cultural
events -- proving that real progress for human rights can best be
achieved by gays and straights jointly manning the rainbow barricades.

For more information: http://www.tupilak.org
Posted by webmaster at 12:28 PM