Stockholm -- The International Day Against Homophobia and Transphobia -- May 17 -- was honored in the Swedish capital by Tupilak (Nordic rainbow culture workers) and ILGCN (international rainbow culture network) Information Secretariat-Stockholm with awards, salutes, music and poetry.
The ILGCN's award for journalism publishing and archives -- "Sappho in Paradise 2022" -- was given to the two chief editors of the Swedish publication, "Ottar" of the RFSU (Swedish Association for Sexuality Education).
"We are honored to receive the awards," say Carolina Hemlin and Ida Måwe, "and are pleased with the motivation mentioning that Ottar is celebrating its 40th anniversary and has often included coverage of the rights and identity of LGBT people." (The award is named after the ancient Greek poetess and the LGBT publishing house, Paradise Press in London helping to choose prize winners.)
The ILGCN's diploma for outstanding rainbow art, "Orfeo Imago 2022" was handed out to Swedish resident/Frenchman Alex Colard: "Thank you Tupilak for the Award, it warms my heart to be part of the artistic LGBTQ+ community. I am thrilled to give hope to many people from all walks of life and to let them know that with hard work and determination, living the dream is possible."
The award is named after the ancient Greek musician, Orpheus, whose male lover was Calais - a fellow traveller on the mythological ship, the Argo.
Tupilak Salutes to Belarus, Sweden, International LGBT History Committee, Founder of IDAHO Day
The event included a Tupilak "skål"to Max Denison, Belarus member of Tupilak's steering committee, who successfully concluded Swedish Institute program of LGBT Belarus journalists and Swedish culture workers. Another "skål" went to Anna Giertz for concluding a program of Rosa Brus gathering LGBT sounds, voices and music. Another to Tupilak finance secretary, Peter Fröberg for helping with the financial transations for both projects -- and for donating his fee from Rosa Brus to Tupilak.
Another "skål" went to Tupilak chair, Sarah Guarino Werner, for being the first Swede to be welcomed into the International LGBT History Month Committee -- based in the U.S. and recently adding members from Italy and Cuba. The Tupilak & ILGCN Nordic LGBT History Month will take place for the 7th time in October as usual.
Golden Tupilak 2005, Argentine and Swedish Music, Poetry
Another tribute was given to the founder of the IDAHO day concept, Frenchman Louis-Georges Tin -- who received the "Golden Tupilak" at a Stockholm ceremony back in 2005. He chose the day marking the World Health Organization's removal of homosexuality as a sickness on May 17.
An IDAHO greeting and music and song for the event was provided via internet by the winners of the "2002 Orphes Musica" award -- the Carpusa Tango duo, Julieta Brizzi and Marysol de Pablo of Argentina.
Live music was presented by Tupilak prize winner and veteran activist, Jan Hammarlund and poetry was provided by Tupilak's award-winning "house poet" Tomas Åberg of Sweden. 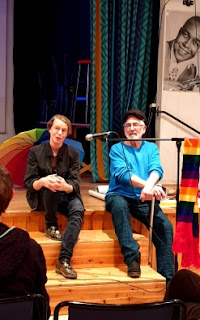