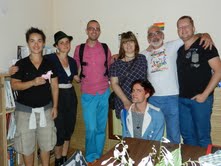 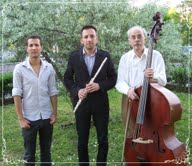 CD's and art work from the Nordic region and Eastern Europe

"We were very pleased to have had this international input into our Belarus Pride,” says Natasha P. of the GayBelarus organization. “And to have once again Swedes joining us in Minsk!”

Despite the ban on any Pride parade, Belarus and foreign LGBT visitors “outwalked” any potential homophobic followers through numerous city streets in different groups, jumped into vehicles and re-appeared in a distant suburb – unfurling rainbow flags, marching a short stretch in the streets and cheering the release of a giant rainbow banner carried to the skies by large helium-filled balloons – to the delight of a crowd of Belarus newspaper, radio and television journalists.


We wery pleased and surprised to see so many Belarus and Polish journalists present both at the GayBelarus office press conference and at the parade – and the positive response and intelligent questions – and great coverage in the media, ” maintains Bill Schiller, Swedish Radio journalist and international secretary of Tupilak (Nordic rainbow cultural workers). “And we are very happy that our 3-way meeting could be part of Belarus Pride – no doubt one of the most important Prides in Europe today.”

The meeting included country-be-country presentations, seminars and discussions, Swedish film screenings and music provided by well-known Belarus singers and musicians calling for democratic rule in this the last dictatorship in East Europe, as well as a musical and dance-filled performance by members of the internationally-famous Belarus Underground Theater – banned by the regime.

“Our meetings in Kiev and Minsk have been very beneficial and show what our organizations can learn from – and teach each other,” says Olena Shevchenko of the women’s organization Insight of Kiev, who also informed the delegates about the importance of working against the Ukrainian government’s and parliament’s plans to crack down on positive information about homosexuality.

During the visit, the three national delegations also visited the office of the internationally-finance Belarus organization working with men having sex with men and combating HIV and AIDS.

“These meetings have given us new inspiration on how to work in new ways for LGBT rights also using rainbow culture as a weapon against discrimination and phobias – including the discrimination of those with HIV and AIDS,” says Taras L. of the Men’s Alliance – Kiev.

The visit also included displays of art and photo exhibitions from Tupilak and the ILGCN (International queer cultural network) which has works from nearly 40 nations and now has new brand donations from the Ukraine and Belarus.

More Belarus photos and art work on the way

“I was very impressed with the international exhibit and will create a special Belarus exhibition at our next event” says journalist/photographer Alexander N., also editor of the biggest LGBT website in Belarus,.

“We are working out plans for long-term Swedish-Belarus-Ukrainian rainbow co-operation – with our next event scheduled for June 1-2, 2012 in the Crimean port of Semiez,” says Slava Bortnik from Belarus Amnesty International and his nation’s second city, Gomel. “Overcoming the isolation of LGBT people in Belarus is crucial for our survival.”

“We hope that the Swedish Institute will continue to provide assistance to make this future human rights and rainbow cultural co-operation possible between East and West,” concludes Bill Schiller, project co-ordinator and also secretary general of the ILGCN Information Secretariat-Stockholm.

Gothenburg - Tupilak participated once again at the Gothenburg Book and Library Fair 2011 September 22-25 – the biggest annual cultural event in the Nordic region – at the International Square, both handing out printed material, displaying books and CD’s, meeting the public and presenting form the main stage Tupilak’s work with Eastern European colleagues.

Included in the stage presentation was the Tupilak annual “Sowelu” award presentation to Swedish singer, musician and song writer Christina Kjellsson, who came up to receive her award. She was honored for her year’s-long contribution to the Nordic rainbow cultural scene and for the use of her music via CD’s at Tupilak events at Nordic, Baltic and Eastern European rainbow solidarity events.

Tupilak shared its stand this year with the newly-created Göteborgs Rättighets Center (Gothenburgs Human Rights Center) – including RFSL-Gothenburg, Homan (working with rainbow refugees) and other LGBT organizations. At the stand , art and photography from the Travelling Tupilak & ILGCN (International Lesbian & Gay Cultural Network) Art & Photo Exhibition were on display.

Kiev/Stockholm - A Tupilak delegation has recently returned from a September 2-4, 2011meeting with Ukrainian, Belarus and Swedish LGBT activists and cultural workers in Kiev -- a trip made possible thanks to support from the Swedish Institute.

This included performances, art & photo exhibits, films, lively discussions and seminars as well as planning for future rainbow co-operation between the three countries.

Information and photos about the visit to Kiev will be presented at Tupilak's last-Sunday-of the-month cultural afternoon at the Stockolm cultural center, Hallongrottan on October 30 (see below.)