Playa del Inglés --  Discussions on the importance of Bear presence on the local, national and internationa rainbow barricades -- and Bear culture --  took place March 9-10, 2017 in this site on the Canary Islands.

"This is even more important in places like Eastern Europe -- helping break stereotyps held by media, religious leaders, politicians and homophobic hooligans -- insisting that gays are weak, feminine, working in unimportant professions and are only "half men" -- deserving no human rights and no protection from homophobic violence," says Bill Schiller of the ILGCN's (rainbow culture international) Bears International.

Other discussions concentrated on the growing existence of Bear culture in the form of art, photography, poetry, films and more.

"I am very honored by this award," Loras said in a facebook comment.  "I am proud to receive this recognition," wrote Jannin-Powell.

"I was surprised to fine out that even some pioneers of the LGBT movement on the islands here were unaware of Franco´s gay concentration camp Tefía on the island of Fuerteventrua -- opened 10 years after Auschwitz was liberated .. and running for a decade before falling into oblivion until only a few years ago, " Schiller said, refering to his monologue "Grey Ghosts of Tefía" honoring those gays imprisoned in the camp.

Bear Talk discussions took place at the oldest Bear bar in the gay-dominated Jumbo Center, Bärenhöhle and the newest Bear bar there, MIAU.

The next Bear Talk is planned during the Baltic Pride-Tallinn in the Estonian capital July 6-9, 2017.

Bears International aims at promoting Bear culture and international solidarity and exchange -- and is open to female, male, trans, immigrant/refugees and all other Bears and Bear supporters.

Located as a link on the ILGCN (rainbow culture international) website:  www.ilgcn.tupilak.org 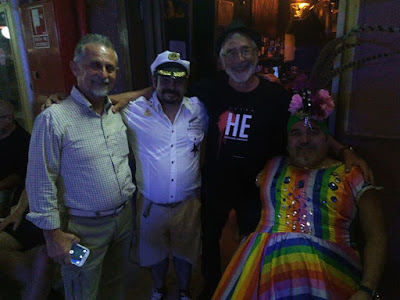