Stockholm -- A LGBT delegation met with the head of the political and economic section, Iwona Jablonowska,  of the Polish Embassy in Stockholm recently to protest over the arrest and detention of Polish activists placing rainbow flags on statues in Warsaw and on the growing number of Polish towns, cities and provinces declaring themselves "LGBT Free" and setting up border signs to this effect.

Dr. Jablonowska promised to check on the legal proceedings against well-known Polish activist, Margot Sztowicz, which she insists was the only activist involved still jailed for the event with rainbow flags and was arrested because of violence and damages caused in the event.
EU Cities Break with Polish "LGBT-Free" Cities and Towns
She also insisted that the "LGBT Free" declarations have no legal consequences and that the civil rights of LGBT people in these some 100 zones have not been diminished, but agreed that they had serious psychological effects.  Noting that a number of European "twin cities" have broken off  relations with their partners and that the European Union has severed financial support for local projects in these "LGBT Free" areas.
She also promised to provide the full list of the Polish "LGBT Free " areas in order to inform those 36 Swedish cities and towns with twinning projects in Poland about the possible status of the "LGBT Free" zone  there.
Several of the Swedish delegates emphasized that the concept of "LGBT Free" was reminicent of the "Juden Frei" policy of Nazi Germany in Poland and the rest of occuppied Europe, and these days promotes hatred and violence against LGBT people.
The diplomat was also informed that the once lively exchange of LGBT culture workers between Sweden and Poland supported by official institutes disappeared several years ago, and she promised to investigate how this could be re-established.
The delegate from Queer Amnesty, Réne Prada,  handed over a statement to be delivered to the Polish minister of justice to guarantee the human rights of LGBT persons in Poland, with demands for en end to anti-discrimination rhetoric in Poland encourging more violence and hatred, for the adoption of punishment for anti-LGBT hate crimes such as legislation existing in Sweden and many other European countries and pointing out that surveys show Poland as the worst place in Europe for LGBT people.
The Swedish LGBT delegates came from Amnesty International, Tupilak (Norddic rainbow culture workers) and the ILGCN (international rainbow culture network) Information Secretariat.
-------------------------------------------------------------
Photos: Warsaw mermaid statue with rainbow flag, Polish town sign "LGBT-Free" 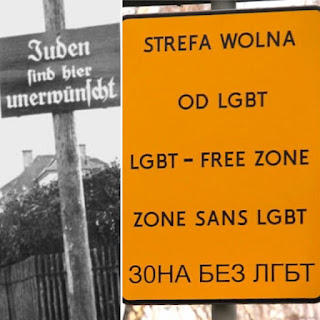 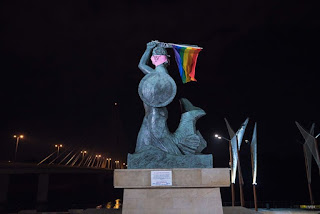