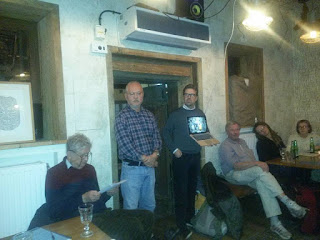 The event was dedicated to "Rainbow Refugees" -- noting that LGBT refugees flee not only at time from warfare and destruction, but also sometimes from homophobic communities, neighbors and even family members.  The event also expressed sharp criticism of Swedish migration authorities at times denying asylum to LGBT refugees by doubting their sexual orientation or arguing that they can return to their homelands safely without persecution or execution as long as they "hide their homosexuality."

A passionate declaration from the northern Swedish city of Umeå was read out load on behalf of 19-year-old Somalian gay, Ahmed Abdi -- repeatedly denied asylum in Sweden and to be sent back home -- facing intolerance and betrayal  from his own family and possible death.

Other presentations were made by activists in the Swedish LGBT group and the editor of Amnesty Press -- comparing growing intolerance in Europe today to the violence of the 1930's as well as the burning of refugee centers in Sweden.  Other presentations came from a Swedish author looking at the torture, imprisonment and execution of opponents to the Franco regime in Spain, and also about the long-forgotten gay concentration camp set up by Franco in the Canary Islands 10 years after the liberation of Auschwitz.

Poetry was dedicated to memories of Kristallnacht and reflecting on attitudes of intolerance in Europe today, and an appeal was made for contributions to the refugee fund of the national Swedish LGBT organization, RFSL -- dealing with a rising flood of LGBT refugees coming to Sweden.

The photography-filled presentation by the Viking Bears illustrated not only the aim of providing space for gays who don't necessarily fit the standard  stereotypes but also the importance of participating in international as well as local events, and for emphasizing Bear culture as a valid part of LGBT culture today.

"We are very pleased to have participated in this event organized by the Amsterdam-based United, linking many other organizations all over the world to commemorate this day all at the same time," says Bill Schiller of Tupillak and the ILGCN.