Budapest -- The 2nd stage of the 2015 ILGCN (international rainbow cultural network) World Rainbow Culture Conference took place in the Hungarian capital between November 16-18, 2015 -- with presentations on LGBT life and culture in Hungary, Sweden, Norway, Germany, Belarus, Canada, Russia, China, Lithuania and Iran. This followed the first stage of this year's conference in Stockholm on May 4-6, 2015.

"This was an important meeting of Hungarians and international cultural workers and activists and we hope this will be followed by more such gatherings here," say Maria Santa and Thomas Lovas, Hungarian conference co-organizers.

Conference participants visited the offices of the national LGBT organization, the Háttér Society, to hear about its 20-year-long work for LGBT rights and culture, and the impressive collection of books, magazines, posters, articles, CD's and films in the Háttér Archives as well as a history of the ILGCN movement in Hungary. The conference also adopted a sharply-worded protest declaration against the right-wing Hungarian government's negative attitude towards refugees, immigrants, Jews, Roma and LGBT people. (see below)

"We are especially grateful to receive facilities free of charge for this 0-budget conference," says Bill Schiller of the ILGCN International Secretariat-Stockholm, saluting the Hungarian Liberal Party, the Democratic Coalition Party, the International Anti-Fascist Office and the Budapest gay bar, Habroló.

Film screenings included "Out of Iran" by Canadian/Iranian Farid Haerinejad, "We Can be Gay Today" about Lithuania's 1st Pride march by Frenchman Francoise Message, "Hunted" on the persecution of gays in Russia by Britain's Ben Steele, "Mama Rainbow" about parents of gays by China's Popo Fan, "Rainbow's Song" about elderly LGBT's by Sweden's Nasrin Pakkho and "LGBT Monuments" by Sweden's Willi Reichhold.

The 2015 ILGCN Rainbow Warrior award was announced at the conference, honoring openly gay Hungarian politician and LGBT rights activist, László Sebián-Petrovszki of the Democratic Party. (this year's award is shared with the SLM Leather Men in Stockholm celebrating their 40th anniversary.)

Conference greetings were received and sent to ILGCN organizers in Lithuania, planning next year's world rainbow culture conference (stage 1) in Vilnius and the Baltic beach town of Palanga between June 10-13, 2016 -- right before the rotating Baltic Pride taking place in 2016 in the Lithuanian capital. 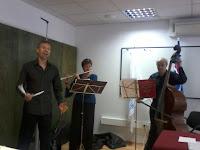 Also part of the ILGCN conference, the 1st European Rainbow Humanist meeting took place in Budapest to help combat religious intolerance towards LGBT communities, approving plans to try to host future LGBT humanist seminars at Prides and other LGBT events in Europe -- and approving the first ERH chairman, Dávid Veres of Budapest and international secretary Andrus K. of Belarus. "We are proud to head this first European-wide humanist organization and see this as a good tool to combat religious and political persecution and homophobia," they say.

"Participants at this ILGCN Cultural Conference in Budapest mindful of the long struggle of the Hungarian People for freedom and independence against the Ottoman and Austrian Empires nevertheless urge the Hungarian people and authorities to recognize the damage done to Hungarian society by policies which suppress or discriminate against minorities such as homosexuals, Jews, Roma and refugees. Gay and Jewish personalities have played a substantial role in world cultural development. As evidence of this we mention only Einstein (Science), Tchaikovsky (Music) and Leonard Bernstein (Music) as well as Michelangelo (Science & Art). We call on the Hungarian people to take steps to change the backward-looking anti-minority policies."
Posted by webmaster at 1:48 PM